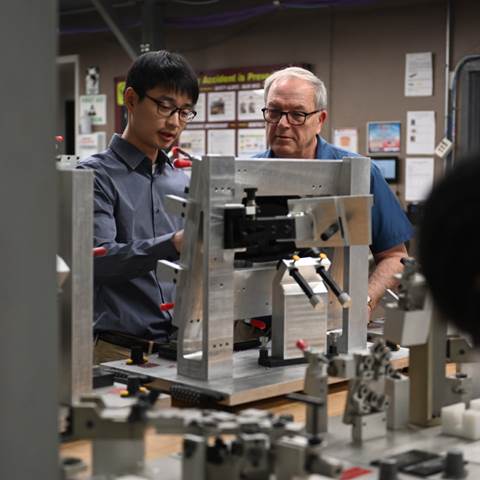 “I knew that I, along with my other colleagues who identify as Asian, felt like we needed a space or a group to not only feel supported, but also celebrated within ITW." - Sharon Lin.

May is Asian American and Pacific Islander (AAPI) Heritage Month, which celebrates the heritage of Americans from across the continent of Asia as well as the Pacific Islands.

First recognized by Congress in 1977, this month-long event was intended to commemorate the immigration of Japanese people to the United States and mark the anniversary of the completion of the transcontinental railroad, which was built primarily by Chinese immigrants in 1869.

This year, in conjunction with AAPI Heritage Month, ITW marks the start of a brand-new employee resource group (ERG) designed to appreciate and celebrate the accomplishments of our colleagues who identify as Asian, Native Hawaiian, and/or other Pacific Islander. AT ITW, Asian employees make up about 7 percent of the U.S. employee base or around 1,200 employees.

The Asian Professionals Engagement Network (APEN) was first envisioned by Sharon Lin, a senior strategic sourcing analyst at ITW Corporate and one of the co-chairs for APEN, in the spring of 2021 after the U.S. saw an uptick in violent crime against Asian-Americans since the start of the COVID-19 pandemic. That is when she turned to ITW’s Diversity and Inclusion (D&I) Council for support.

“I knew that I, along with my other colleagues who identify as Asian, felt like we needed a space or a group to not only feel supported, but also celebrated within ITW,” said Lin.

To help create APEN, Lin initially put out a call to action in November 2021 to 27 colleagues across ITW’s seven segments to see if there was interest in starting this ERG. Almost all of them responded and showed interest – a promising sign. Formed from this initial group, APEN’s founding members and advisors worked together towards a stretch goal of launching during AAPI Heritage Month.

“It was really exciting to see that much interest and engagement so early on in the development process,” said Lin. “Clearly there were others who felt the same and were also looking for a sense of belonging and pride as Asian Americans at ITW.”

Dhaval Desai, the vice president and general manager of ITW Powertrain Plastics and co-chair of APEN, said that in addition to support from colleagues across the enterprise, ITW’s corporate leadership team has expressed commitment to this ERG.

“It was clear early on that ITW, and our leadership team in particular is committed to improving D&I within the organization,” said Desai. “When we look to supporting every ITW colleague, we are not only demonstrating an effort to retain our talent, but we are also attracting the best talent to come work for our organization.”

APEN officially launched earlier this month with a virtual kick-off event open to everyone within ITW. Lin and Desai worked with other ITW ERGs, including PRIDE and IWN, to gather best practices ahead of the launch.

“From the beginning of this process, we received so much help and support from different people at all levels of the organization,” said Lin. “Everyone, including the other ERGs within ITW, wanted to help which is a real testament to the spirit and culture of ITW.”

The Future of APEN

While APEN is still early on in its journey, the team has big goals for the rest of 2022 and 2023 including hosting and sponsoring a bystander intervention event in June, while also building additional awareness and engaging new members.

“We are an ambitious group,” said Desai. “ITW gives you the freedom to spread your wings and expand beyond your day-to-day activities. I have been so impressed with the energy and joy that our team continues to bring to APEN.”

For Lin and Desai, launching during AAPI Heritage Month was also special.

“This is our one time of year where the spotlight is on us,” said Lin. “This is the perfect time and perfect platform to give us additional visibility while celebrating our global heritage.”